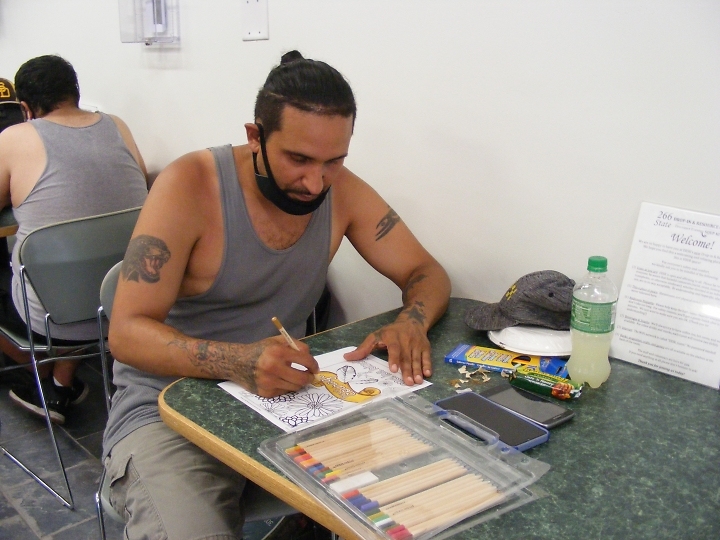 The following article appeared in the New Haven Independent on June 11, 2021. The original post, along with reader comments, can be viewed here.

For the first time in decades, homeless New Haveners have a place downtown where they’re invited to come hang out, have an iced drink, socialize, and escape from the summer heat, no questions asked.

That place is the Downtown Evening Soup Kitchen (DESK) drop-in facility at 266 State St. in the Ninth Square, inside a building the nonprofit purchased last December. DESK’s drop-in facility is open Sunday to Friday from 1:30 to 4:30 p.m.

This is the first step in DESK’s transition from 311 Temple St. to the new facility. Eventually, all of the nonprofit’s activities, including the original dinner service that kept people fed during the pandemic, will be at 266 State. The three-story building will provide not only basic necessities but a comfortable place to access a variety of higher-level resources.

The drop-in center revives a service the People’s Center provided in the 1990s, to give people downtown with nowhere else to go a safe dedicated place to hang out. Now people often end up in public places primarily devoted to other uses.

The drop-in center opened in April.

“We’re focused on serving the whole person,” DESK Executive Director Steve Werlin said. “The goal of this program is to provide people who have no place else to go with a place to hang out during the day, get a cup of coffee, sit down, have something to eat, use wifi, meet with case managers or outreach workers. A place they can not fear of being kicked out -– a place they can call home.”

“It’s an environment where you can just relax and not worry constantly,” he said.

Two visitors on Wednesday, who gave their names as Harley and Joker, echoed those sentiments. Both said they have gotten to know Werlin and other staff members and praised the atmosphere of the new facility.

“It’s my three hours where I don’t have to worry,” Harley said. “They treat me like a human being. You’ll always find a friendly person with a smile. And it’s caring from a genuine place, and this is the only place that has helped us indiscriminately.”

A visitor who gave his name as John said that DESK’s dinner service became an invaluable resource after he was laid off from his job in hospitality during the pandemic and couldn’t meet his rent. Now the new drop-in services are making DESK “better and better and better.”

DESK “helped many people get through the pandemic, and it’s still helping them now,” John said.

The drop-in facility is typically staffed with two employees, known as “site specialists,” as well as a few volunteers. For site specialist Angela Lewis, who typically works at DESK’s original Temple Street soup kitchen, the new space is a shift. Though the crowds at each location overlap, she said, the drop-in center is “calmer” and allows her to connect with the visitors she serves.

Werlin noted that one of the new goals for the space is blurring the lines between providing and receiving services. Joan Morrison is a weekly volunteer with DESK. On Wednesday, she was manning the refreshments kiosk, handing out bottles of water, seltzer and iced tea. When she has downtime,  Morrison finds a place to sit, chatting with visitors and hearing life stories.

“I do like listening to people talk. That’s what I like about coming here. You never know who’s going to be here and what they’ll talk about,” she said.

Marty Cobern, who was manning the front desk on Monday, said he has seen attendance over the last few weeks grow “tremendously,” with around 30 people frequenting the space daily.

DESK staff members are still working out some of the new building’s kinks. They haven’t been able to turn on the air conditioner yet, reyling on a giant fan to cool visitors. Problems in the basement led the team to temporarily close the bathroom on Monday, leading to some groans.

The second floor is currently unfinished and will be fully open once DESK raises money for and installs an elevator to make the space accessible. Besides hosting a hospital-grade bathroom and conference rooms, it will serve as a flexible work space for the nonprofit’s various partners, which include the Cornell-Scott Hill Health Center and the Sex Workers and Allies Network. DESK’s long-term vision, Werlin said, is to make the State Street facility a centralized hub for the homeless.

“What we’ve found over the years was that people were coming to us for food, for a meal, but because they felt comfortable in our space, they were able to easily connect to other services and build some rapport with social workers and outreach workers. This is us doubling down on that idea.”

These partner groups have previously worked with DESK visitors at their space on Temple Street, and are currently utilizing the first-floor drop-in space. The second floor will allow for more private or sensitive conversations.

“It’s a great resource,” Hill Health nurse practitioner Anna Graham said of the new building. “This is a consistent space where we can follow up on things.”

“Growth is such a good thing!” Werlin said. “We knew that as we were expanding that we would need office space, so this building is great.”

Also added to the team was data analyst Wendy McLeod. DESK has always recorded its daily attendance, but “finally” has a dedicated staff member to interpret that data in a useful way, she said. Looking at the numbers, McLeod said, revealed that the pandemic-induced curbside services DESK added last year actually increased, rather than the volume of visitors served, which could prompt directors to make those programs more permanent.

“What we do is give people the reassurance that they can deny giving us information and still use the service,” McLeod said. “It builds trust, and makes the person more important than the service. It’s all about how we can gather data and be more efficient without stripping away their dignity.”