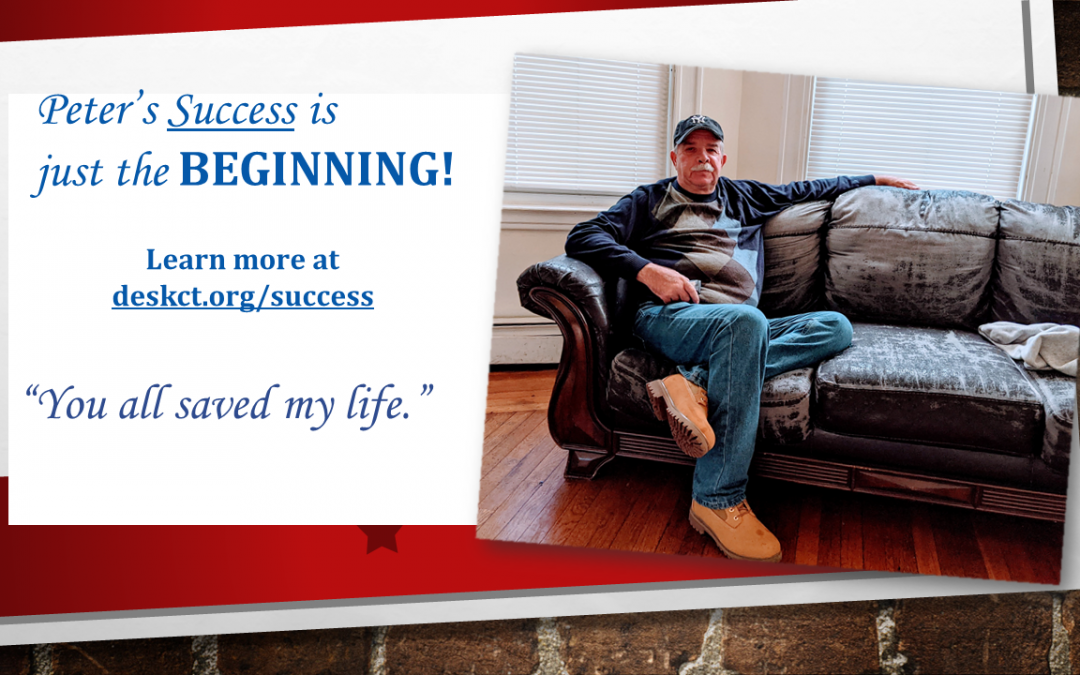 Successes at DESK come one person at a time.  I want to share Peter’s success with you:

Peter was the first one in the door.

On the day we opened our new Drop-in & Resource Center in April, Peter had been on the street for a month, having just returned to Connecticut after more than thirty years.  A few weeks before opening day, he had been walking down State Street, and he struck up a conversation with me as I was heading into the building.

“I remember that day we met on the street,” he recalled, “You listened to me.  You took the time and listened to me.”  As my staff always tells me, listening is the first step in helping.

“I took some wrong turns in my life. I should have listened more.”

For Peter, this was a hard-earned lesson.  Peter never makes excuses for his choices, but he’s suffered from mental health challenges throughout his life.  He’s worked a variety of jobs since the late ‘70s.  With a smile, he says he couldn’t overcome his temperament enough to make it in customer service.  General anxiety disorder can be a difficult barrier to steady employment for many people.

In time, Peter found success working with his hands in more creative capacities.  Always artistic, he discovered a talent for creating commercial signage.  It was as a signage contractor that he found himself in Cocoa Beach, Florida, making signs for NASA!

That’s also where Peter found the love of his life, personal fulfillment, and, for the first time, some peace and stability.  Then, after 31 years of marriage, the unthinkable happened: Peter lost his wife to cancer in late 2019.  He slipped into depression and old patterns.  And sadly, the place that had offered him opportunities for employment and success, offered very little in the way of support and services.  So he returned to Connecticut.

“You all saved my life.”

Trauma begets trauma, and the longer you go without a roof over your head, the greater the damage.  “There’s a real relationship between [mental] stress and physical health,” says Peter, who has also been in and out of the hospital for a variety of ailments in recent months.  With winter quickly approaching, the prospects for Peter were grim.

So it was with a great sense of relief that last month Peter got the keys to his new apartment!

In the current housing climate, this was no small feat.  “I was determined,” says Peter, “I made it my quest to get off the street; [but] I give your crew all the credit … You guys really know how to handle this stuff!”

To be more accurate, it was all-hands-on deck.  Our Drop-in Center staff worked closely with Peter; meanwhile, behind the scenes, they coordinated with our housing partners.  None of this could have happened without Peter’s trust, his willingness, and his “laser-focused determination,” as he puts it.

Peter’s story is just one example.  At DESK, our staff and volunteers work daily to provide each individual who walks through our doors with needed support—whether it’s a cup of coffee, a housing application, or just someone to listen.  And to be sure, Peter’s quest isn’t over.  By his own account, he’ll need a community around him to overcome the barriers of trauma, depression, and anxiety to remain housed and stable.

But the first step is complete: Peter’s off the street.  And that wouldn’t have happened without DESK.  Our new Drop-in & Resource Center was designed to be that first step—a doorway into a complex world of services.

By supporting DESK, you are helping others to find successes like Peter’s in 2022.  This is how we end homelessness in New Haven: one success at a time.

Please make your end-of-year (or new monthly!) donation right now.  If you’re interested in long-term giving or contributions through your retirement savings, learn more about DESK’s Legacy Society at deskct.org/legacy.

Let’s all make sure that Peter’s success is just the beginning.

Thank you as always,